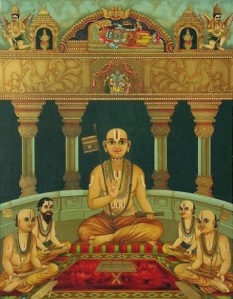 While several points can be made with citations from the works of Azhwars and Acharyas to present the case of their deep devotion to Aruliccheyal, nothing would be more appealing to the scholar and the layman alike as the ongoing practice of chanting the hymns of Azhwars in temples, and the practice of leading the Lord’s procession with chant of hymns.

It is a sight to behold when those versed in Aruliccheyal stream out in front of the Lord sanctifying the ambience with sounds of devotion.

The custom has been installed and revived periodically by our Acharyas out of the understanding that the hymns of Azhwars are dearest to the Lord.  No occasion of His passes without the chanting of hymns. Owing to this exalted nature of this custom, upholding Aruliccheyal Kainkaryam forms one of the key indulgences of Srivaishnavas.

The position of Azhwars and Aruliccheyal, and their suitability to temple worship has been progressively cultivated by our Acharyas. Swami Azhagiya Manavala Perumal Nayanar establishes these principles in Acharya Hrdayam. Accounts of Swami Vedanta Desika also suggest that the acharya defended the practice of chanting hymns in temples and processions. The number of explanations offered by our acharyas to the hymns of Azhwars reveals their deep reflection of the hymns and their import. It would not be an exaggeration to state that the system of Srivaishnavism-Visistadvaita is merely the fragrance of Aruliccheyal emanating from the Acharyas who breathed and lived its message. 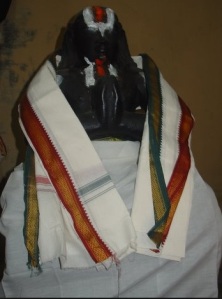 Even for an acharya like Swami Ramanuja, whose works are primarily in Sanskrit and oriented towards the exposition of Sanskrit Vedanta, we discover connection to Aruliccheyal through his explanations and anecdotes from his life mentioned in Divya Prabandha Vyakhyanams and Guru Parampara Prabhavams. Thiruvarangaththu Amudhanar, a contemporary and disciple of Swami Ramanuja (and Svami Koorathazhvan), finds that the first thing to praise about his master is his scholarship and experience of the hymns of Azhwars and the relationship he bears to these divine saints.

However, every field has its nay sayers. Everywhere, we find a group of men spreading half-truths and conspiracy theories. When the tenets of a system are put forward, some would claim that these tenets do not have the support of the scripture. In truth, the person making this statement would himself be ignorant of the nuances of scriptural analysis. But, as long as he pulls forth a charm in his disposition, the less learned and simple minded people would be confused. Some of them might even take faith in his claims.

One variety of individuals would claim that the Lord in His image form as Archavatara has no scriptural basis without analyzing the Vedas and Agamas carefully. They would assume that the ability to chant a section of the Vedas is sufficient qualification to comment on every Vedic practice. This is not the method followed of any of the Acharyas of our tradition. Writing things off without careful consideration of why Acharyas chose to act or speak in specific ways is recipe to disaster.

There is reason to this digression.

Aruliccheyal is not spared of its nay-sayers despite the monumental evidence that establishes the divine inclination of our Acharyas. The nay-sayers would claim that despite the ongoing custom of reciting Aruliccheyal in temples and despite the historic evidence in the form of records, there is no direct commandment of Swami Ramanuja in any of his nine works instructing his disciples to chant Aruliccheyal. 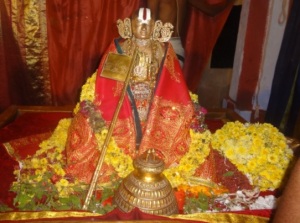 This is a blind accusation. None of the nine works of Swami Ramanuja direct address his disciples. (Such instructions have been noted by his disciples and their notes are available to this date.) The only work where we might expect to find some instruction is the Nithya Grantham – which is supposed to be the last work of Svami Ramanuja. In this work, Swami Ramanuja explains the procedure of worship.

So, if Swami Ramanuja was really inclined towards Aruliccheyal, he must have included the recitation of Aruliccheyal in the worship-procedure, should he not?

and indeed he does.

Swami Ramanuja, whose thoughts are fully drenched by Thiruvaymozhi, uses the same epithet in Nithya Grantham. He calls Aruliccheyal as

Aruliccheyal is a form of praise. So, it is “stotra”. It is not some random stotra, it is śṛtisukha stotra – the praise that is pleasing to the ear – sevikkiniya señchol. 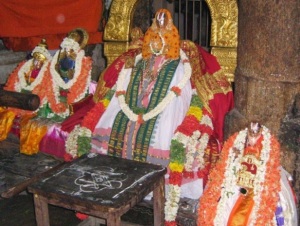 Swami Ramanuja does not call Aruliccheyal as “Azhvar’s hymns”.  He calls them by the name given by Azhwar himself – śṛtisukha stotra or sevikkiniya señchol – revealing both his own mastery of the hymns as well as his advocacy of them.