Continuing from the last episode, we look at other sections of the maṅgalaśloka of Sribhashya being inspired by the words of Azhwars.

What is the literal meaning of this compound word?

rakṣaikadīkṣa – who has their protection as His sole vow

It is an epithet for the Lord and translates as the One who has the protection of different classes of souls as His sole vow.

However, this is not the meaning intended by Swami Ramanuja. Both Swami Srutaprakasika Bhattar and Swami Vedanta Desika favour a different meaning for this word.

To understand the different meaning, let us investigate meanings of words in Sanskrit. The word “vrāta” is synonymous to “samūha” and “pariṣat”. It stands for group or community or class. Consider the word “brāhmaṇa-samūha”. Clearly the word refers to an aggregate or assembly of Brahmanas. The compound word is resolved by “ṣaṣṭhī-tatpuruṣa-samāsa”. Consider another word “rāja-pariṣat”. Though “samūha” and “pariṣat” are synonymous, the meaning of this compound word is radically different. It does not denote an assembly of kings. It denotes the royal court presided by the king and attended by ministers and subjects. Though this word is also resolved by “ṣaṣṭhī-tatpuruṣa-samāsa”, the spirit of the meaning favoured by the word is different from that favoured by “brāhmaṇa-samūha”.

This analysis shows that words such as the above need not denote only assembly or groups of similar things but also entities connected with something – such as minister & subjects connected with a king.

From this analysis, vrāta does not denote group of devotees, but devotees and those connected to them (sambandhis). The prefix “vividha” or different makes this clear. Those connected to devotees may be of different nature, stature and kind. Regardless of these differences, the Lord protects them honouring their connection with His devotees.

This meaning is supported by the pramāna:

An animal, a human or a bird, that has taken refuge in a Vaishnava, attains the Supreme Abode of Vishnu due to that very connection.

The hymn is interesting because it places the word “human” between animal and bird, instead of placing it either at the beginning or the end. This is to show that the individual qualifications of the human are not important. Only the sambandham is important. Also, when the Lord rescues such a soul, He rescues them not seeing them as “this is human and his knowledge is such”, “this is an animal and its merits are such”, etc. Instead He rescues them purely on account of the sambandha itself. This is shown by the use of the word “eva” showing that nothing else is considered.

This meaning is important because it showcases a beautiful trait of the Lord which is His rescuing love extending beyond His immediate devotees to even those who have sambandham with His devotees.

When this meaning is not taken, the words vividha and vrāta do not offer any useful meaning. Either one should have been sufficient to indicate plurality. Therefore our acharyas do not favour the superficially apparent meaning and seek the true intention of Swami Ramanuja.

This meaning is intended by Swami Ramanuja because it is favoured by Azhwars.

(Thiruvaymozhi 2-6-7) are places where Azhvars have conveyed the same meaning.

In all of the Brahma Sutras, nowhere is the Lakshmi sambandham of the Lord mentioned. Yet, in his opening verse which would be seen as the author’s summary of Brahma Sutra’s message, Swami Ramanuja reckons the Lord as Srinivasa. This is due to the injunction of Azhwars that the Highest Lord must be identified as the Lord of Sri and that those without Sri must not be resorted to.

is a popular maxim from the cannon of Azhwars. 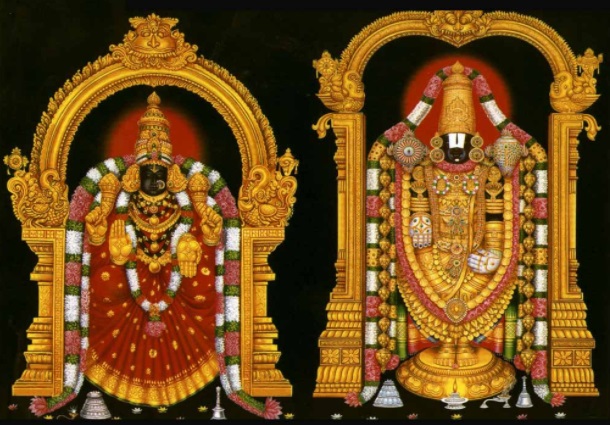 This is a very strange request for the uninitiated. It is understandable for one to say “May I be enlightened in the matters of Srinivasa” or “May I be devoted to Srinivasa”. However, Swami Ramanuja uses a complicated “May my awareness of Srinivasa take the form of devotion”.

In one stroke, Swami Ramanuja follows the method of Azhwars and also puts forth a crucial concept about Visistadvaita.

In the spiritual world around us, there are two divided camps. One group of schools are said to follow Jnana Marga or the way of knowledge, and another group of schools are said to follow Bhakti Marga or the way of devotion. Historically, the tensions between these two ways are well documented. The Visistadvaita Vedanta of Swami Ramanuja is often incorrectly classified Bhakti Marga. There are problems with such classification because Bhakti Marga has come to mean “devotion as opposed to dryness and fallibility of knowledge” whereas Jnana Marga has come to mean “knowledge based on reason as opposed to the sentimentalism and emotions of devotion”. Even the moderate schools view either Jnana Marga as a stepping stone to Bhakti Marga or vice versa to assert the superiority of one’s Marga.

The Visistadvaita system does not view Jnana Marga and Bhakti Marga as opposing cults – not even as stepping stones to one another – but the exact same thing. Jnana in the matters of spirituality is essentially of the form of Bhakti and does not exist in any other way. Likewise, Bhakti is made of Jnana itself and nothing else. Therefore, Jnana is neither “dry” and “theoretical” clothed in mysterious language nor is Bhakti a mere outcome of sentiment and emotion. The knowledge of the Supreme Brahman who is the Lord of Sri, who is repose of all auspicious attributes and devoid of all blemish, who is the Master of all sentient and non-sentient elements that are His modal expressions and inseparable to Him in an organic whole, by whose will the universe is formed, sustained and destroyed, for whose sake it exists in its entirely including all sentient and non-sentient forms, who is the sovereign Lord, whose essence is full of bliss and awareness, whose nature is auspicious, whose divine form is resplendent and beautiful, charming to the eye and trapping the mind, whose actions enthrall and enlighten at once, who is the means to Himself and is the Supreme end, this knowledge leads immediately to spontaneous love or devotion and incessant remembrance. This knowledge when truly realized can exist in no other form than that of devotional love towards the Brahman. Therefore in Swami Ramanuja’s system Jnana and Bhakti are not orthogonal, not different, not exclusive, not incomplete, but two sides of the same thing.

It is more from the adherents of Jnana Marga that we hear the greater voices of condescension that Jnana is for the intelligent and Bhakti is for the crude. (This might be because love softens the heart while the illusion of knowledge creates pride.) We can safely assert that such words serve only to boost their own specialty and have no basis in scriptures.

These words of Swami Ramanuja directly translate the word of Azhwar – mathinalam.  “mati” is synonymous with “śemuṣī” according to Amarakosa. Nalam is Bhakti. Azhwar says that the Lord graced him knowledge which took the shape of Bhakti or Bhakti which is made of knowledge of the Lord. In this manner, Swami Ramanuja closely follow the example set by Azhwar.  While Swami Ramanuja is the torch bearer of enlightenment to the world, it is no doubt that Azhwar is the torch bearer of enlightenment to the master himself.