It is clear that in order to understand the works of Swami Ramanuja, one has to learn his letters at a very deep level. A superficial reading has been found to be insufficient in revealing the real import of his words. This difference is significant when we compare the situation with the works of Swami Alavandar, Swami Azhvan, Swami Bhattar and Swami Desikan.  This difference is a matter of style and intent. 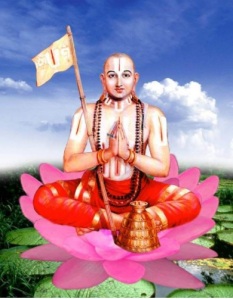 A student of Swami Ramanuja might choose to completely ignore the depth of meaning set in his words and seek contentment in the superficial flavour of the words.  Then the student would lose sight of the overall picture conveyed by Swami’s words. One has to pay careful attention and understand the deep context of Azhwar’s words set in the background of Swami’s statements to get the complete picture.

Consider the hymn in praise of Swami Alavandar at the opening of Gita Bhashyam:

It is well known that Swami is pañcācārya-padāśrita, one who has five preceptors. The cause for this is that Swami did not obtain the opportunity to learn directly under the lotus feet of Swami Alavandar. Therefore, he had to resort to the arrangement made by Swami Yamunacharya to learn the principles of Sri Vaishnavism from his five disciples. Though the education of Swami Ramanuja was similar to Lord Krishna learning under Sandipani Rishi, the mode of education took place indirectly through the five disciples of Swami Yamanucharya since Swami Yamunucharya had cast aside his earthly form before Swami Ramanuja, Swami Ramanuja could reach Sri Rangam with the interest of becoming his disciple.

Therefore, it is strange that Swami Ramanuja sings the praise of Swami Alavandar at the outset of Gita Bhashyam but does not pay similar respects to the five acharyas from whom he learned the tenets of Visistadvaita Srivaishnava tradition. Likewise one might question why Swami Ramanuja has not paid his respects to the entire Guru Parampara but has limited himself to sing the praise of one acharya. In the works of Swami Azhvan, Swami Bhattar and Swami Desikan, we find explicit references to the Guru Parampara and to previous acharyas in clear detail.

The answer to these questions is that though Swami Ramanuja has not explicitly mentioned the intermediate acharyas and the Guru Parampara, a reference to them is verily present in the hymn.

In this manner, Swami Ramanuja offers his obeisance to the entire Guru Parampara up to his five acharyas. That is why, Thiruvarangaththu Amudhanar, a contemporary and disciple of Swami Azhvan, celebrates Swami Ramanuja in reference to his association with the knowledge systems of Azhwars and other preceding Acharyas.

This is a mark of true genius. A normal person would ordinarily convey a simple meaning which is allowed by his intellect. However, an unparallelled genius that Swami Ramanuja is, provides meaning hidden at several levels to constantly delight his devotees who unravel these secrets as they immerse themselves in the experience and reflection of his mighty words. The words of the master have grown old but their impact on the devotees stays forever new and enlivening.