Proving the core thesis from Aruliccheyal

Clearly, no philosopher of Vedanta would venture to claim that the notion of Jivatma itself is incorrect. After all, if the philosopher was asked, “Who enjoys the pleasure and pain in this world?”, the answer cannot be Paramatma. At least a stand-in Jivatma would have to be admitted. Also, even the Vedanti, who advocates the identity of Jivatma and Paramatma, agrees that the Jivatma, which endures pleasure and pain in this world, is not exactly identical to Paramatma.  The identity of Jivatma with Paramatma in these systems is only indirect and not exact.  The Jivatma is identified with Paramatma only in that it is understood that the Jivatma is a manifestation of the Paramatma through mechanisms like ‘reflection’ upon the mind, etc. .

The approach of Vedantic metaphysicians has been very different in solving this problem. The Advaita approach is to consider that the Vedantic statements that speak of difference are secondary in importance to those that teach identity. The Advaitins hold that difference is valid only as long as one is bound to ignorance and once it is removed by knowledge, there is no more difference. They quote heavily from the passages of the Upanishads where identity is taught, while brushing aside those that teach difference as belonging to a lower level of truth.

The metaphysicians of difference have adopted the opposite approach. They do not consider that the passages of the Upanishads that the Advaitin cites for identity speak of identity at all. They consider that the Jivatma and Paramatma are both spiritual entities unlike the inanimate world. They seek to teach that the Jivatma belongs to the spiritual league of the Paramatma instead of the physical league of the inanimate world. They cite extensively the passages of the Upanishads that teach difference and hold that there is real difference between the Jivatma and Paramatma. They argue that there is no basis for the claim of the Advaitin that difference is a state of ignorance

Visistadvaita Vedantins have a special position with regards to the Upanishads. They do not regard either the statements that teach identity or those that teach difference as primary or secondary. They treat both sets of statements with equal importance. Then how does one resolve the apparent conflict? Visistadvaita Vedantins show that the solution to the problem does not have to be offered by external reasoning. The solution is also offered by the Upanishads themselves. This is the only argument of the Visistadvaitin. There is no need for a great genius to invent a framework in which the passages of Upanishads stand resolved. The Upanishads themselves provide that framework. As long as one recognizes this framework taught by the Upanishads, all contradictions are immediately resolved.

Visistadvaitins point out that there are not two, but three sets of passages in the Upanishads:

Since the first and second sets have already been explained, let us look at the third set of passages.

The key passages, which belong to the third set, come from the Antaryami Brahmana of the Brhadaranyaka Upanishad, one of the oldest recognized Upanishads, and the Subalopanishad. These Upanishad passages teach that the relationship between the Jivatma and the Paramatma is similar to that of the body and the soul. The Jivatma is a spiritual body of the Paramatma. Paramatma has for His body both the inanimate entities and the Jivatmas. This relationship conveys that the Paramatma is the Antaryami and Antaratma of all including the Jivatmas. This relationship is eternal and is the very character of Paramatma and Jivatma. They do not exist otherwise. Therefore, Jivatma and Paramatma always exist as one entity but are different in their essential nature, one being body and other being soul.  The definitions of body and soul are supplied by Swami Ramanuja to avoid over-simplified extrapolations, but these are beyond the scope of the current article.

Visistadvaitins hold that Advaita, Dvaita and Visistadvaita are all simultaneously and eternally true. The Paramatma and Jivatma are always one in entity, and all references to the Jivatma always end with the Paramatma. The very nature, existence and activity of Jivatma are forever based in the Paramatma.  Paramatma without Jivatma or Jivatma without Paramatma does not exist. It is only in this light that identity is true. In the essential character, Jivatma and Paramatma are different. The Paramatma never suffers from samsara and is beyond it. Paramatma is full of auspicious attributes, untouched by blemish, the creator, protector and destroyer of all, the support and pervader of all, omniscient, omnipotent and omnipresent. The Jivatma is bound by samsara, suffers the storms of pleasure and pain, is bound to Karma and cannot self-rescue oneself from this trouble. The Jivatma is utterly dependant on the Paramatma to whom the former is subservient and devoted by nature.  Loss of realization of this true nature leads to suffering. In this light, the Paramatma and Jivatma are very different. The simultaneous sustainability of difference and identity is possible in different lights because of the sarira-sariri (body-soul) relationship between Jivatma and Paramatma, which is advocated by the Ghataka Srti passages in the Upanishads. In this manner, the challenge of Bhedabheda posed by the Upanishads is resolved without confusion in Visistadvaita. Visistadvaita is not a novel perspective of the Upanishads; it is the honest approach to respect all sections of Upanishads and use its own passages to resolve the apparent conflict. This is fully consistent with the opinions of sages like Sri Veda Vyasa, Bodhayana, Tanka, Dramida, Guha Deva, etc. and is in tune with the opinions of the Ithihasas and Puranas. Thus, Visistadvaita preserves the glorious Vedantic tradition of this land in beautiful harmony. Karma, Jnana, Bhakti and Prapatti find significant value and application in the Visistadvaita framework. Visistadvaitins do not consider that those who practice one teaching of Vedanta are in ignorance and those that follow another are enlightened. They reconcile all the texts of the Vedanta using its own traditional methods. 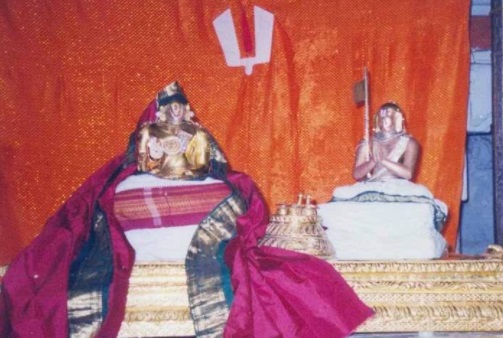 How is it that Visistadvaitins recognized the Ghataka Srti which the others missed?

The answer is that Visistadvaitins were guided by the words of Azhwars. The first two decads of Azhwar’s Thiruvaymozhi provides the essence of the Brahma Sutras, and thus the Upanishads.

In this section, Azhvar explains the import of the Ghataka Srti by the passage,

that clearly brings out the sarira-sariri relationship. It is this passage that provides the clear direction to Visistadvaitins in studying the Upanishads. It is not an exaggeration to say that the preceptors of Visistadvaita like Swami Ramanuja saw the truth of the Upanishads shine with splendor when seen in the light of the hymns of Azhwars.

It is not only here, but also in resolving another key challenge of the Upanishads that Visistadvaitins take cue from Azhwars.

Some passages in the Upanishads say that the Brahman is Nirguna or devoid of attributes; other passages attribute auspicious and wonderful attributes to the Brahman, which is Saguna. Different commentators have offered various solutions to this problem. These will not be explained here, but it suffices to say that these have no basis in the Upanishads, but depend on additional reasoning. The Visistadvaitin solution is to see that Nirguna and Saguna are two sides of the same Brahman. The Brahman is free from the modes (gunas) of nature and from blemish; in this sense, it is Nirguna. The Brahman is full of infinitely auspicious and uncountable auspicious attributes; in this sense it is Saguna.

The Supreme Personality is the repository of lofty and uncountable auspicious attributes.

In fact, this is the very definition of the word ‘Brahman’. The word comes from the root ‘brh’ which denotes greatness. The greatness of the Brahman is known by its innumerable auspicious attributes declared in the scriptures

Swami Ramanuja explains “Brahman” in the same way following the words of Azhwar:

They are indeed fortunate who can seen the tune of Azhwars echoing through the words of Swami Ramanuja.