Swami Parasara Bhattar is a legendary genius in the tradition of Srivaishnavism. His understanding of the tradition is unparallelled and his mastery of the subject is comparable only to Swami Ramanuja himself. This is the reason for Swami Ramanuja’s decision to have Sri Vishnu Sahasranamam commented by Swami Parasara Bhattar. The commentary on Sri Vishnu Sahasranamam by Bhattar is called Srimad Bhagavad-Guna-Darpanam. This commentary is entirely based on the words of Azhwars. Given the volume of that work, it would be beyond the scope of this work to show all the parallels between that work and the works of Azhwars.

Therefore, we will only look at a few illustrations from Sri Rangarajastavam. Bhattar praises Azhwar in the beginning verses of SriRangarajastavam as,

Bhattar identifies Azhwar as a sage (ṛṣi). Azhwar is also identified as the very embodiment of love to Lord Krishna. It is as if Krishna Bhakti and Azhwar are non-different. Bhattar also says that the import of the innumerable branches of Vedas were revealed by Azhwar in Tamizh language.

In the 13th hymn, Bhattar says,

The first part of the hymn closely follows the Upanishad “yasyāmataṃ tasya mataṃ … “. He who thinks that the Brahman is known, to him the Brahman is not known. He who regards the Brahman as yet unknown knows the Brahman. In the next part, the hymn says “stutaṃ parininditaṃ bhavati ninditaṃ stutam” – praising the Brahman becomes censure; even censuring becomes praise. This part is not mentioned anywhere in the Upanishads. Instead, it comes from Azhwar’s words. Azhwar says in Periya Thiruvandadi,

The interesting part is that Bhattar regards that both parts are from “trayī”. This indicates that Bhattar regards both the Upanishads and the Divya Prabandhams as Vedic scripture. This opinion is made explicit in the 16th hymn: “svaṃ saṃskṛta-drāviḍa-veda-sūktaiḥ” indicating that there are the verses of Vedas appear in two languages – Sanskrit and Tamizh.

The constructions of Thirumangai Azhwar in the form of halls, towers and passages are worshipped in the 36th hymn as

Since these halls and walls and towers are full of marks of Urdhvapundra and the signs of discus and conch, he says “vaidikayanniva”. It appears as if the material used to construct these structures has been made Vedic by these marks. 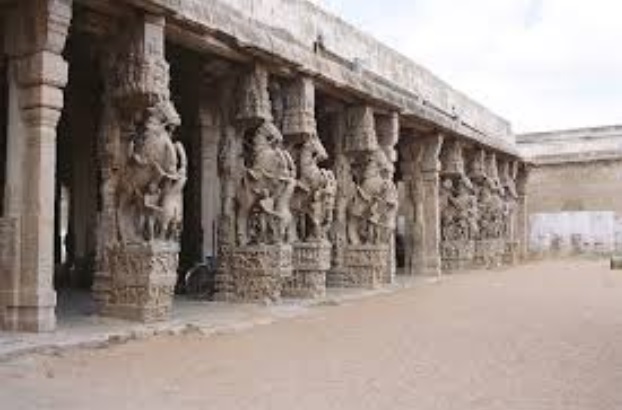 The Azhwars who are resident on the eastern shore of Chandra Pushkarini are celebrated in the 41st hymn:

While describing the tree on the shore of Chandra Pushkarini, Bhattar says,

Kulasekarazhwar describes the experience in front of Lord Sri Ranganatha in the following manner:

The nectarine floods emanating from the beautiful and divine eyes of Lord Sri Ranganatha toss the devotee about making it impossible for one to stand firmly in one place before the Lord. In order that one might have sustained experience, one must embrace the pillars called “maṇatthūṇ” to support oneself. This explanation for Azhvar’s words is provided by Bhattar in the 59th hymn.

he says that the Lord of Srirangam deems the words of Nammazhwar as a manifestation of His resting place.

We will make ourselves clowns trying to show the correlation between the words of Azhwars and Bhattar any further. Bhattar’s words blossom with the fragrance of Azhwar’s words that one might find the influence of Azhwars everywhere in his works. Those who experience his words with the help of informed commentaries are indeed fortunate.