The comprehension of the import of Vedas

The verse is dedicated to praise Svāmī Yāmunācārya. The importance of Svāmī Yāmunācārya is emphasized by noting his role in removing the confusion prevalent during his times in understanding the import of Vedas. Svāmī Yāmunācārya authored several texts such as Siddhitrayam and Āgamaprāmaṇyam to clarify the position of Vedas.

In this verse, Svāmī Rāmānuja identifies three popular schools of thought in Vedānta from his times. He briefly mentions the biggest problems in subscribing to each of the three schools. In this way, he provides a short criticism of his rival schools.

In the system of Advaita, the Highest Brahman itself is deluded and undergoes saṃsāra. 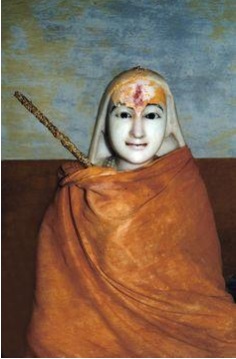 The word ‘param’ indicates excellence.  The excellence of Brahman is explained in the Vedas. The Brahman is full of auspiciousness and is devoid of all blemish. This is why it is called Brahman or The Excellent, and is deemed worthy of knowing. The Brahman fulfills the welfare of all those who submit to It, and removes their suffering.

There are two contradictions in Advaita: (i) If the most excellent Brahman itself becomes shrouded in ignorance, then what is its excellence for which it is called Brahman? and (ii) If the Brahman, which is the saviour of all, becomes deluded, who else will save the Brahman?

The word ‘eva’ emphasizes the above contradictions.

On account of becoming ignorant (ājñam), the Brahman is trapped in an illusion (bhramaparigatam). The illusion is the perception of difference. The sustained experience of difference is saṃsāra.

The illusion should already exist for the products of illusion to be produced and to experience it. Therefore, the Brahman itself must experience the illusion first.

The Brahman is constrained by modifying qualifiers and becomes entrapped.

This deals with the account of Bhāskara. Bhāskara realized the difficulties of a logically unsustainable ontological position of avidyā, which somehow deludes the Brahman which is the only real entity. So, he advocates real qualifiers called upādhi. The word ‘para’ indicates that the qualifiers are independent and real. The qualifiers are different from the Brahman. Constrained by these qualifiers, the Brahman becomes entrapped in the cycle of karma.

Again, this description involves the contradiction of an excellent Brahman gets constrained and undergoing suffering itself.

The Brahman becomes the abode of inauspiciousness.

The words ‘paraṃ-brahmaiva’ are to be considered for all the three systems. These words intend to convey the contradiction that the highest, most excellent and blissful entity, which is untouched by defects, and perfect in all auspiciousness, becomes subject to ignorance, suffering and inauspiciousness in the systems of Śaṅkara, Bhāskara and Yādava Prakāśa.

Answer: Because they are also ‘jagati vitatam’ – They are well spread across the world. Owing to their strange conception, many people get excited by these ideas.

Question: So be it! Let the ideas be wrong, and opposed to the intent of scriptures. Let them be full of logical contradictions and be followed by several people.  Why should you set out to criticize them?

Answer: Because, by following these paths, one can only get deluded. The ideas are mohanam or deluding. Therefore, this darkness of ignorance deserves to be criticized.

Through this characterization, the author establishes motivation for himself to criticize these philosophies. We are led to understand that it is an act of grace of Svāmī Rāmānuja to deny incorrect interpretations of scriptures. An enlightened person should act out of grace to uplift other beings from ignorance. However, while disciples might take this opinion, the author himself is resting this act at the lotus feet of his preceptor Svāmī Yāmunācārya.

May Yāmuna Muni be victorious who dispels the (aforementioned) darkness!

Svāmī Rāmānuja recognizes the role of his preceptor in refuting ideas which do not subscribe to scripture and logic. He sings benediction to his preceptor that his act of enlightening the people may remain victorious forever. 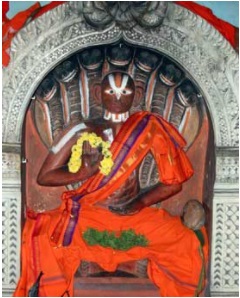 It can also be understood that Vedārtha Saṅgrahaḥ is an act through which the victory of Yāmuna Muni is made everlasting. Instead of merely singing victory to his master, the disciple makes it meaningful by writing an entire treatise explaining his master’s position.