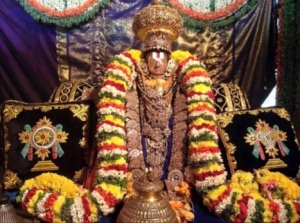 The comprehension of the import of Vedas

Also, from where does the knowledge that removes the perception of all difference become born? If one says that it is born from the Vedas, it cannot be accepted. The Vedas lack the ability to produce knowledge that removes the perception of the illusory universe. This is because (1) they are different from the Brahman and (2) they are the product of avidyā themselves.

Assume that due to faulty perception, one mistakes a piece of rope for a snake. This illusion cannot be removed by another knowledge ‘this is not a snake’ if it is also produced from the same faulty perception. When a person is afraid due to confusion over whether the object in front of him is a rope of a snake, this fear is not removed by the affirmation of another person, who is subject to the same confusion, that the object is not a snake, but only a rope. Nor does the affirmation of a confused person produce the confident certainty that the object is not a snake.

True knowledge can emerge only from true sources. In the system of Advaita, the Vedas are as much a product of ignorance as anything else since they are of the character of difference. Being a product of what they seek to remove, their testimony becomes untrustworthy and incapable of removing the effects of illusion.

If one thinks that the knowledge which removes difference, the knower and the Vedas which are the source of this knowledge are also sublated by the same knowledge on account of being different from the Brahman, it creates even more problems.

It is like a person seeing the death of his son in a dream but waking up to find him alive. Being part of the dream, his son’s death is false and in reality, his son lives on.

The passages like tattvamasi are powerless to sublate the universe as they have the same illusion for their source and are like the words of a person, who is himself confused if an object is a rope or a snake.

If the Advaitin argues that everything other than the Brahman is an illusion, even the removal of the illusion and the one to whom it is removed become illusions. Since the universe is well established through experience, the illusory nature of its removal only points to its real existence.

One might respond to the above criticism as follows: In the case where one attains fear in a dream, but realizes at some point, ‘I am dreaming’, and becomes rid of the fear through the knowledge that the events are part of dream.  The situation here is similar.

This response also does not solve any of the problems. If one knows that the knowledge which removed the fear is also part of the dream and hence false, the original fear returns.

Even as a student of Vedas, one is taught (in Advaita) that even the Vedas are part of the dream.

Fear in the dream experience is removed by true knowledge of waking experience and not by merely by a dream-contained feeling that this is a dream.

In some mental disorders, the person considers even the waking state to be unreal or dream-like, and only suffers pain as a result leading to chronic fear and depression.

Another possible response (from Advaita) is as follows: Though the Vedas are products of illusion and are ultimately false, their content that the Brahman is pure, non-dual being is true. The truth will be seen from the fact that when everything else is sublated, the Brahman remains.

Even this response is not appropriate. Even the Brahman becomes sublated to the śūnyavādi-s (Buddhists) who declare, ‘There is only the void’. The Advaitin cannot brush aside the Buddhist with the claim that the statement of the Buddhist is a product of ignorance. Because, in his own claim, the Advaitin has to admit that his interpretation of Vedic statements regarding the Brahman are also a product of ignorance.

In truth, neither the Buddhists (who are upholders of the void doctrine) nor the Advaitins (who are upholders of the ultimate unreality of everything other than the Brahman) are qualified to indulge in philosophy at all. This is because philosophy presumes that there are valid means of knowledge to decide if one view is better than the other. For both these groups, the valid means of knowledge are illusory and there ends their exercise in philosophy! This has been pointed out by other teachers too.

The fundamental requirement in philosophy is that the source of knowledge (pramāṇa) is as true as the philosophized conclusion (siddhānta). The former cannot be less true, untrue or illusory compared to the conclusion. If one’s philosophy denies the equal truth of the sources of knowledge, such as perception, reasoning or Vedas, one has ended up cutting the very tree upon which one is sitting and the entire philosophical structure comes crashing down. The conclusions of philosophy cannot deny the equal reality of the knowledge on which they are based. Anyone who attempts to do so is unqualified for philosophy.

Besides, by what source of knowledge is it confirmed that the perceived universe is ultimately false?

A possible response is as follows: Perception is a product of ignorance and hence defective in ascertaining truth. Through the defectless scriptures, the reality of perceived experience is sublated.

This response is also incorrect. What is the defect in perception that leads to the experience of difference? Is it not the timeless ignorance and habituation? Alas! Not just perception, but even the Vedas are the products of the same ignorance. Both perception and Vedas being equally the products of ignorance, one cannot sublate the other.

In contrast, our system resolves these different sources of knowledge more consistently. Perception is the cognition of the elements such as space, air, etc. and their possessing properties like sound, touch, etc. and their existing as beings in the form of humans etc. The Vedas deal with subjects that are beyond perception: the true nature of Brahman who possesses infinite attributes such as being the self of all, the ways of meditating on and worshipping the Brahman, the fruit attained through the blessing of Brahman upon attaining Him, and the means of destroying that which is not favorable to the attainment of the Brahman. Thus, there is no contradiction between perception and the Vedas.

Perception and the Vedas are complementary sources of knowledge.

The scholars who uphold the superiority of Vedas on account of their not having origin or end, of coming in unbroken spiritual tradition and other such excellent qualities must necessarily uphold the validity of perception in which these qualities are cognized.

This much is sufficient in refuting this theory (of Advaita) which is weaved out of faulty logic and an incorrect view of the Vedas, and is refuted by hundreds of Vedic assertions.

The section ‘Criticism of Advaita’ is concluded.