The Gadyatrayam is a delight to devotees.  In the section, starting akhilaheyapratyanīka in Śaraṇāgati Gadyam, Swami Emperumānār describes the outstanding nature of the Lord, His divine form, His auspicious attributes, His divine and beautiful ornaments, His divine weapons, and His divine consorts.

Some devotees who have witnessed the utsavams of Lord Namperumal have seen Him various types of abhiṣekams.   They might think that the different words refer to different crowns adorned by the Lord.

In the current context, where we are experiencing the works of Swami Emperumanar through the words of the Azhwars, it becomes pertinent to consider if Azhwars have experienced the Lord in this fashion.

Each of the three words has a separate meaning.

pāraḷanda pērarasē! refers to the Lord as the king on account of His saulabhyam.  He placed His divine feet upon the heads of everyone in this world during His incarnation of Trivikrama.

emvisumbarase! refers to the Lord as the king on account of His paratvam.  He lords over the Nitya Sūris in Vaikuṇṭha.

emmai nīththu vañchiththōrarasē! refers to the Lord as the king on account of His praṇayitvam or love for Azhwar due to which He mingles with or parts with Azhwar at different times.

A doubt can be raised here if praṇayitvam is not part of saulabhyam itself.  It is true that praṇayitvam can be experienced as a subset of saulabhya guṇams.  However, it is a very special guṇa of the Lord and deserved to be experienced separately.  Saulabhyam is generic and applies to all souls.  When the Lord placed His divine feet upon the heads of all, He did not discriminate between them.  However, His praṇayitvam is experienced only in the case of Azhwar and is a special guṇam.   Saulabhyam is common to even those who are engrossed in material pleasures as in

However, His praṇayitvam is manifest in the special case of Azhwar to whom

It is customary to experience such special qualities even when they are conveyed by other generic terms.  Swami Emperumanar himself gives us another example in Sri Bhashyam. 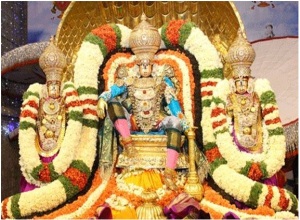 At the very outset, he shows that the Para Brahman, Srinivasa is “akhilabhuvana-janma-sthema-bhaṅgādilīlaḥ” or one who creates, protects and destroys all the worlds as if by sport.  Then, again He is regarded as “vinata-vividha-bhūta-vrāta-rakṣaika-dīkṣaḥ” which celebrates Him as the protector of His devotees.  Though His nature as the protector is already apparent in “sthema” previously, it is repeated again.  In “akhila-bhuvana-sthema-līlaḥ”, He is regarded as the protector of the entire world in general.  In ” vinata-vividha-bhūta-vrāta-rakṣaika-dīkṣaḥ”, His special form of rakṣaṇam with respect to His devotees is celebrated.  In the same manner, praṇayitvam is experienced as a special form of saulabhyam.